Request your demo now! Fill out the requested field and our sales team
will contact you within 24 hours to schedule a demo.

PRESS RELEASE - Iristick officially announces that the Iristick.Z1 smart safety glasses are now compatible with iOS smartphones. From the start, Iristick made the choice to tether the Iristick smart glasses to a smartphone. This combines the best of both worlds: powerful, yet comfortable to wear smart glasses, complemented with the fast-evolving processing power of a smartphone.

Linking the Iristick.Z1 to an iPhone gives companies with a strict iOS company policy the benefits of working with smart glasses for remote assistance, work instruction guidance and pick-by-vision.

Iristick smart glasses are now fully compatible with both iOS and Android smartphones.

Why are Iristick the first smart glasses to do so?

Until today, no smart glasses device on the market has been compatible with iOS, making the use case for smart glasses in some industries impossible.

The Iristick.Z1 smart glasses are tethered to a smartphone for its processing power, weight distribution and battery requirements, opening up a range of possibilities other smart glasses do not have. These advantages were previously only available for Android phones. Moving forward, it will be possible for the entire range of iOS devices to be tethered with smart glasses.

Why is it so hard to make smart glasses compatible with iOS?

“Traditionally, iOS was a closed system that could only work with external hardware by using very intrusive modifications to the iPhone. Iristick does not require any modification to iOS. The new Iristick framework hides all hardware-level complexity and offers software partners a highly transparent software layer. Creating applications for Iristick becomes standard iPhone application development.” Riemer Grootjans, CTO

Is the market waiting for iOS compatible smart glasses?

In some industries, e.g. pharma, life sciences, space and aero, iPhones and the iOS operating system are IT standards. In those industries, IT departments are reluctant to accept non-Apple devices for multiple reasons (security, deployment cost, …). This makes working with smart glasses impossible for them, since there are no smart glasses on the market that support Apple phones. At the same time, these are industries where remote assistance and work instructions can significantly improve quality and solve compliance issues. Now, these companies no longer have to compromise by introducing non-standard Android devices. The iOS-Iristick combination solves this dilemma.

What applications are ready for this combination of Iristick smart glasses and iOS?

“Proceedix is a digital platform for enterprise work instruction and inspection execution with mobile and wearable technology. Technicians, operators and inspectors execute their workflow with Android, iOS or Windows tablets and phones. The Proceedix app also runs on assisted reality smart glasses like the Iristick.Z1. For the past 2 years we have leveraged the power of the Iristick.Z1 with an Android phone for hands-free guidance of complex workflow execution. We absolutely welcome the new combination with an iOS device for various customers in Aerospace, Pharma and other process industries.” Peter Verstraeten, CEO Proceedix 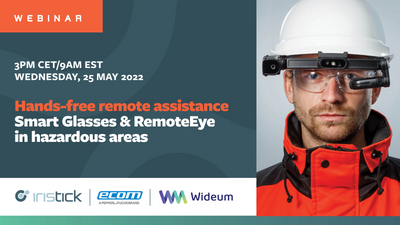 Want to know how Iristick Smart Glasses can help your business? Ask for a demo!